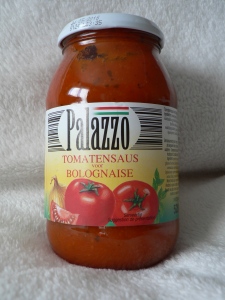 Don’t let the word “Bolognese” throw you; there’s no meat whatsoever in here. (It’s not that clear in the picture, but it’s sauce for Bolognese rather than Bolognese sauce.) I’ve checked with the manufacturer regarding the aromas used and they have confirmed that the sauce is completely free from animal ingredients!

This will never match a good homemade sauce, but it’s not bad and so incredibly convenient for a quick weekday dinner. I’ve used this both as a base for vegan Bolognese (with soy crumble) and also just as a sauce with veggies. I tend to throw a sploosh of wine or sherry into it to give it a little depth, but I do that with homemade sauces too, so I guess I just roll that way.

Palazzo brand is made specifically for the Aldi, so that’s where you’ll find this. 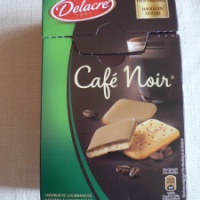